Anthony A. Garganese is the managing shareholder of Garganese, Weiss, D’Agresta & Salzman, P.A. He is certified by The Florida Bar as a specialist in city, county and local government law, and has an extensive background in land use, zoning, and First Amendment law as well. He is the recipient of the highest rating (AV) given by Martindale-Hubbell for legal ability and ethics. He has been chosen as one of the best lawyers in the area of municipal law by Best Lawyers in America, Orlando Magazine, Florida Legal Elite, Orlando Business Journal and as a Florida Super Lawyer by Law and Politics. He previously served as the executive board President (2015/2016) for the Florida Municipal Attorneys Association and in 2019, he was awarded the prestigious Paul S. Buchman Award. The award is presented to the state’s most outstanding municipal attorney and recognizes the recipients contribution to the field of municipal law. In 2007, Mr. Garganese was named City Attorney of the Year by the Florida League of Cities.

He currently serves as the City Attorney for the cities of Cape Canaveral, Cocoa, Winter Springs, and also serves as special counsel to numerous other cities throughout Florida. In addition, he serves as general counsel for the Housing Authority of the City of Titusville. He has represented cities in a significant number of complex and precedent setting cases in state and federal court.

Anthony is a certified circuit-civil mediator, as well as a Florida Supreme Court trained and qualified arbitrator. Mr. Garganese is admitted to practice in Florida state and federal courts, the U.S. Court of Appeals for the Eleventh Circuit, and the Supreme Court of the United States. He earned his law degree from Nova Southeastern University. He also earned his bachelors and masters degree in business administration from Bryant College. 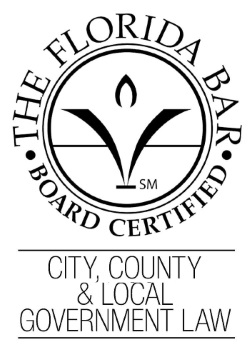