Erin J. O'Leary is Of Counsel with Garganese, Weiss, D’Agresta & Salzman, P.A. She is board certified by The Florida Bar as a specialist in Appellate Practice and is "AV" rated by Martindale-Hubbell for ethical standards and legal ability. She previously served on the Florida Bar Appellate Court Rules Committee. Ms. O'Leary's practice is focused on the areas of appellate practice and complex litigation support. In those capacities, she represents clients on appeal to Florida's District Courts of Appeal, the Florida Supreme Court, the Eleventh Circuit Court of Appeals, and the Supreme Court of the United States. Additionally, she assists trial counsel by briefing complex legal arguments at the trial level in both state and federal courts.

Ms. O'Leary has represented clients in a significant number of complex and precedent setting cases in both state and federal courts.

Ms. O'Leary is admitted to practice in Florida state and federal courts, the United States Court of Appeals for the Eleventh Circuit, and the Supreme Court of the United States. She earned her law degree from Nova Southeastern University, and earned her bachelor's degree in English from the University of Florida. 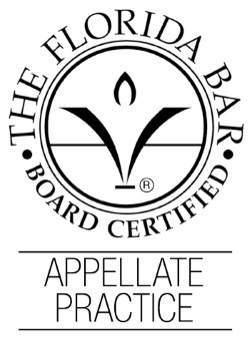 Certified by The Florida Bar as a Specialist in Appellate Practice.